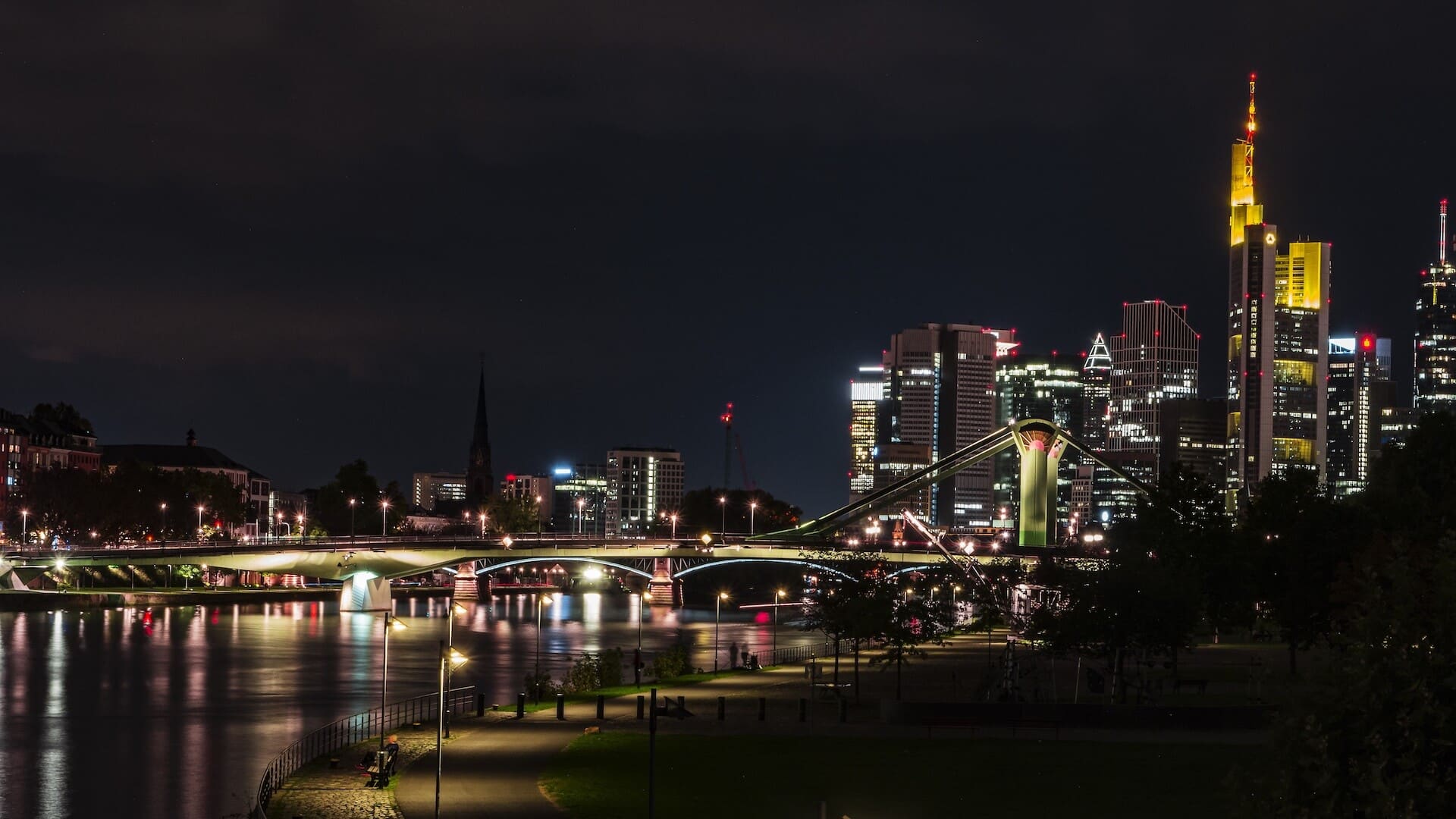 by HexGn
in Top Startup Cities
Reading Time: 6 mins read
48
SHARES
Share on FacebookShare on TwitterShare on LinkedinShare on Whatsapp

Germany is opening up more and more avenues for startups in the country making its way to become the top place for startups. Frankfurt?s startup ecosystem is an important pillar of Germany?s startup culture and is in a developing phase. The city is an exciting option for entrepreneurs and startup jobseekers owing to its rapidly growing business environment.

Frankfurt is the financial capital of Germany and is a historically important city as well.? The concentration of financial activities in the city contributes significantly to the city?s GDP of $230 billion.? The fintech cluster in Frankfurt has encouraged many entrepreneurs to move to Frankfurt and has also helped put the city on the map when it comes to startup ecosystems.

5.8 million people call this city home and this number is one the rise rapidly as many more move to Frankfurt to be a part of a startup ecosystem that is still in its infancy. There are a little over 200 startups in the city and the state hopes to welcome more in the coming years.

Why is now a Good Time for Startups to Move to Frankfurt?

Moving to a startup ecosystem that is still developing has its own charm. A number of factors like low living and working costs, lesser competition, and bureaucratic changes like that of Brexit have helped in creating a favorable base for entrepreneurs to startup and established startups to expand their business. Entrepreneurs should move to the city for one plain reason – the city needs startups! That?s right, the city has all the resources and not enough startups to explore its potential to the fullest. Moving here while the startup scene is still young can be beneficial in many ways. The city is an ideal place for startups in chosen sectors like finance, tech, chemical and pharmaceutical sectors more than any other as these already have a strong foundation.

Move to Frankfurt and Stay Well Connected with the World

Frankfurt’s excellent connectivity is an important advantage that entrepreneurs can leverage. The ease in connectivity offers the convenience of shipping goods to and from the city. This is especially important for businesses with tangible products that have a global customer base.

Startups in Frankfurt have access to the biggest airport of the country,? a fast and efficient railways network, and roadways that are strategically planned to help people get in and around the city in the least time. The transport infrastructure system contributes significantly by creating a sustainable jobs market as well.

The city houses some crucial tech and finance giants which that are important worldwide. Setting base in a town that has global players can help businesses find resources easily and help them find leadership in the leaders of these giants. For B2B companies, working in proximity with such large names can help them find a strong base in these institutions for a reputed and robust customer base. The central location of the city makes it very easy for businesses to scale the German market and the regions around the country more simply. Companies have also been moving to Frankfurt as it falls under a trade route that connects different parts of the world bringing together a diverse market. Startups can take advantage of this and find a firm footing in various niches of the target audience.

Frankfurt may have a small number of startups presently, but the number of angel investors and other funding parties is at par with cities like Berlin. This may be due to the presence of highly profitable financial institutions. There are more than 3,300 angel investor in the city and several high profile venture capital firms like Idinvest that are helping startups in Frankfurt get monetary support for starting their business.

Startups in Frankfurt can Explore many Startup-Friendly Resources

Since the city’s startup ecosystem is still young and does not have much of competition between the various companies, entrepreneurs moving to Frankfurt stand a better chance at getting the many business-friendly resources of the city. Frankfurt may not have such pocket-friendly rent prices for commercial properties but has affordable alternatives to tackle the skyrocketing real estate costs. Entrepreneurs and startups can choose to work from a co-working space ( a more affordable option) than renting an entire office space which may be expensive. Co-work & Play is one of the biggest shared workspaces brand in the city which offer several office plans for professionals. There are several other co-working office space brands like WeWork that offer such offices in more than one location in Frankfurt.

Accelerators like Accelerator Frankfurt GmbH, Nidus – the Brand Incubator GmbH, and Main Incubator GmH are some of the handful lot in the city. Frankfurt also presents a lucrative opportunity for incubators and accelerators to come set base in this financial capital to solve any gaps when the startups in the city increase.

Frankfurt is Expat Friendly and Multicultural

Apart from the fertile startup environment that inspires entrepreneurs and startup job seekers to move to Frankfurt, several other aspects of the attract an international audience. The city’s educational scene is one of them. The city’s growing status as an up and coming startup ecosystem and the many reputed educational institutions like Goethe University Frankfurt, Frankfurt University of Applied Sciences, and Frankfurt School of Finance and Management attracts hundreds of students to the city each year. A lot of them move to Frankfurt with the hopes of finding a strong foundation for their entrepreneurial aspirations in the city after graduating.

TechQuartier is the only Startup Genome Member in the city and one of the most prominent catalysts for the startup culture in the region. The brand provides support in the form of incubator programs, co-working office spaces, and its strong international community by creating a conducive environment for the exchange of ideas and trade.? Some of the other ecosystem partners in the city include Hessen Trade & Invest, Blackprint Booster,? Frankfurt Economic Development, and? DZ Bank Gruppe among the others.

When it comes to startup niches, the tech sector seems to take the cake for being one of the best-performing ones in the ecosystem. The industry does not just contribute significantly to the growth of the regional economy but also creates startup jobs in Frankfurt like no other sector. Known as Europe’s Silicon Valley, the city boasts of some of the highest earning software companies that contribute to 40% of the sales revenue in the region. Some of the sub-sector strength of the tech niche include:

The city?s status for being the financial center of the country has helped in making the fintech startup sector a prominent one. Fintech startups bought home 50% of the total local venture capital funding between 2012 and 2017 and have grown with the support of the significant financial institutions in the city. Various global financial institutions have set up their headquarter in the city and also have introduced an array of programs to help the startups in the region. These include funding programs as well as incubators. The city also witnessed the most massive fintech exit in Germany around three years ago when ?Deutsche B?rse acquired 360T for $800 million. This exit elevated the status of the entire startup ecosystem in Frankfurt and inspired many to move to Frankfurt.

The sub-sector is continuously fuelled by the local universities and initiatives that are dedicated for its growth. Universities like the Technical University Darmstadt and Goethe University Frankfurt offer globally recognized courses in the field of Big Data & Analytics. A notable story in the sub-segment is that of Arago that raised $55 million so far in funding. The company offers intelligent automated services for businesses and is a prominent AI company in the region.

This sub-sector is one of the youngest areas in the tech niche but has arrived with a bang. The sub-sector may still be in early stages but prominent enough to outdo many of the other sub-sectors in terms of growth, funding and other aspects. Authada (a product of the Technical University Darmstadt ) and Acellere are two star companies of the sub-sector.? Acellere developed an analytics software and raised $2.5 million in Series A round of funding in January.

Moving to Frankfurt can help startups enjoy the best startup climate in its early stages. There are plenty of resources and not much competition at this point. Startups in Frankfurt that are moving to the city can quickly become the stepping stones for its growth and also help in moulding the growing startup community in the region.

Share19Tweet12Share3Send
No Result
View All Result